John Darwell works with museums and galleries on projects that reflect his interest in social and industrial change, issues around the depiction of mental health and his concern for the environment.

His has exhibited and published widely, both nationally and internationally, including exhibitions in London, Amsterdam, the USA, Mexico, South America and the Canary Islands. Most recently his work was shown in

‘Liminal Britain’ at The University of North Texas; ‘Uneasy Spaces’ at 80 Washington Square East Gallery, New York and ‘Terror’ at Intersection for the Arts, San Francisco. His work is featured in a number of important collections including the National Media Museum/Sun Life Collection in Bradford, the Victoria & Albert Museum, London and the Metropolitan Museum of Art, New York.

He has had seven books of his photographs published, including ‘Legacy: Inside The Chernobyl Exclusion Zone’ (2001) ; ‘Dark Days’ (2007) a major study of the 2001 Uk Foot and Mouth epidemic and ‘Committed to Memory’ at 25 year retrospective of his work to coincide with exhibition of the same name at Tullie House Museum and Art Gallery, Carlisle in May-July 2007.

He is currently working on projects ‘After Schwitters’ based on the artist Kurt Schwitters ; DDSB’s a study on the phenomenon of discarded dog s**t bags and has just begun a major new project ‘The Allotment as Cultural Landscape’.

In 2008 he completed his practice led PhD research entitled ‘A Black Dog Came Calling: A Visualisation of Depression Through Contemporary Photography’.

He is currently Senior Lecturer at the University of Cumbria teaching on BA and MA courses in photography and supervising PhD candidates.

Further examples of John’s work and additional background information can be found at: http://cumbria.ning.com/ and www.johndarwell.com.

Over the past two years I have observed with increasing fascination the growing number of discarded dog shit bags (ddsb’s) I encounter whilst out walking in both open countryside, urban parklands and even suburban streets. This has led to a great deal of speculative thought on my part as to why this situation has developed.

I can fully understand dog owners simply ignoring their dogs output (unpleasant as it is for anyone who encounters it with all its negative health associations) as it will in a relatively short time biodegrade and essentially disappear. I can also appreciate dog owners who scoop and bag dog mess and place it in a bin for disposal. What I fail to understand is the increasing number of dog owners who bag their dog’s mess and then discard in bushes or hang on fences/tree branches or leave in the middle of pathways and playing fields. Is this purely about not wishing to be fined and thereby picking the right moment to surreptitiously dispose of the offending article? Whatever the reasoning the ddsb has very quickly become a feature of our environment.

The images presented here become typologies that reflect on the nature of function and style and confront the viewer with the (often unseen) contents of the bags leading to a mixture of amusement, bemusement, curiosity and revulsion. 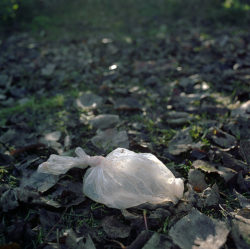 ‘Not Starting From Here’

‘This work is a journey of exploration and encounters along the Cumbria coastline (home of the Lake District) in the most north western county in England.

The work travels from the northerly point of the coast to the counties southerly most point. The only limitation I set myself being that whenever I took a photograph I had to be able to see the sea somewhere within my field of view whether it appeared in the image or not.

This region is rich is post industrial history and notorious for being the home of the Sellafield Nuclear Reprocessing Plant.

My aim was to produce a personal journey to help me better understand my feelings for this 80 mile stretch of coastline within the county I had made my home’. Further examples of John’s work and additional background information can be found at: www.johndarwell.com.