I guess, broadly my (our) work is ‘landscape art’. I am (we are) interested in a creative and critical relationship to place, spaces, encounters and events in all and any of its potential manifestations – political, personal, topological, psychological, phenomenological or nonsensical. My work manifests as video, image, sculpture, installation, performance, sound, music or text.

The processes of the work reflect and embody encounters – adventures and misadventures in ‘real life’ which often includes climbing and mountaineering alongside my day-to-day life and an open response to the politicized landscape of urban Belfast, where I live.

Within many of my works relating to the politicized and physical nature of space I’m often involved in appropriating and disturbing the emblematic phraseology and iconography of place and rolling this up together with my contemporary lived experience and interactions with stuff that matters, which for me includes anything, nothing is off topic, but especially the phenomenologically rich activity of climbing and mountaineering alongside more mundane aspects of daily life and events of place. It is a strange brew where a song sung by my child might sit next to the drama or serenity of a mountain crag and the news of yet another rhetorical impasse at Stormont or beyond. I call this process pata-perception (loosely, “wilful and grounded imagination”, which I elaborate to some extent in various works and talks) – it’s really a way to think about artists’ method, what artist do when they are involved in making art. Somewhere, there undoubtedly twists and turns a form of the sublimity, but one which might refer to the subtle terrors of hegemony or blatant terror of political violence as much as the terrain of the vertiginous drop or the awareness of awesomely different scales and means of apprehension. As part of this approach I often collide periods, events and places, e.g. the years around early 20th Century, the 1970’s and the present; the Dolomites and Ulster; or scale from the molecular to the data-point, to the immediate to the ecological. I do so with a concern for the visual, political and philosophical possibilities of meshing out-of-sync objects, times, places and events.

For me the term ‘landscape’ is a very leaky term, spilling from the mountains and hills to deluge the imaged streets around me and also then to swirl as data-sets, events, people, places and incidents that register in my life. All this is political, all this is present in my here and now and all this is connected.

Since 2004 many works and projects have been co-authored with Neal Beggs (shipsides and beggs projects) another artist-climber-musician based in northern France with whom I share a love of art, mountains, music and creative madness. There is often little separation between our individual practice – we have a mutual freedom to share, combine and mutate our interests.

Biog. Dan Shipsides, Former co-director at Catalyst Arts, Belfast and is an artist based in Orchid Studios and also a lecturer at the Belfast School of Art. 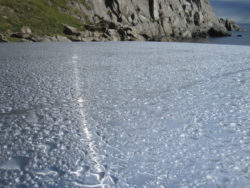 Three Points Down to Zero Where the Lines Ends Dan Shipsides (1972 Lancashire, England) is based in Orchid Studios, Belfast.